While out in early May, I was checking out a frequently used fox den near my usual walking route.  It's in the deep woods about 30 yards behind a row of townhouses and has four or five entrances over an area of about 15 square yards.  I walked up to investigate the main entrance and came within a foot of stepping on a sleeping kit.  The kit blended in perfectly with the reddish brown leaf cover left over from the fall/winter.

I quietly moved away and sat down on a fallen tree trunk less than 20 feet from the den entrance.  The kit eventually awoke and went in the den offering no good shots.  I decided to wait a while just to see what might happen.  Within five minutes, the tinniest kit I've ever seen emerged from the den.  He was wobbly and seemed very unused to the daylight.  He saw me, gave me a close look, but clearly didn't have any idea that I might be a danger.  Soon, four more kits emerged from the den.  Again, they all spotted me (remember, I'm 20 feet away), but didn't seem alarmed.  I'm pretty sure they had never seen a human before.

Over the course of the next 15 minutes, I continued to take photos (about 200) while the kits wandered around the den entrance.  They would occasionally get spooked by my slight movement, but quickly realize that I wasn't an immediate threat.  They were also pretty inquisitive.  One actually came up to me and sniffed the toe of my boot.  After a couple of seconds, he scampered back toward the den.

The area around the den is heavily wooded with oak trees, oak saplings, many briar vines and the usual forest undergrowth.  The den is several years old - maybe decades.  I have kit photos at the den from as early as 2008 when I first started shooting wildlife.  The light is generally pretty awful for photographing.  There are a few places where the sunlight periodically peeks through, but by and large, it's very low light - even with no leaves on the trees.  By May, new growth is rapidly appearing and shooting conditions deteriorate daily.  So, I am just about always using high ISO (1600-3200), shooting with a wide open lens (f4 - f5.6) and using slow shutter speeds (1/60th - 1/125th).  White balance (I use auto and adjust in post processing as best I can) is also tricky with the new green foliage overhead, the occasional sunbeam shining through, changing light and the deep shadows.

As kits grow older, they quickly become increasingly aware of their surroundings and get easily spooked by any movement.  Over the course of the month of May and early June, they became harder and harder to photograph.  Generally, when they spotted me, they would dart back into the den.  I photographed mostly from three locations behind large trees,  I would often wait for 30 minutes or an hour near a den entrance before any of the kits would appear.

The parents were always out hunting for food.  Clearly, feeding five kits is a full time job.  They catch anything they can, but the kit diet is mainly Eastern Chipmunks and Eastern Gray Squirrels.  I have even seen a kit eating a Red-shoulder Hawk.  I have no idea how it was caught.

By early June, the size differences of the kits seemed to increase.  The largest was possibly twice as big as the smallest.  In past years, there is always one kit that seems to be the most aggressive, but I've never seen size differences like this 2015 litter.  Throughout most of May, I rarely saw the parents.  I can't believe they didn't know I was visiting the den almost every day.  They must have seen me a time or two.  In late May while I was at the den, one of the parents walked up with a chipmunk for the kits.  When I was spotted, the parent immediately walked away stopping a time or two to make sure I was following.  I was led about a hundred yards from the den out into the open (on the edge of a golf course).  The parent lay down under a small bush and just sat there for ten minutes while I sat in the open taking photographs.  I was only 20 feet away.  This was clearly a very trusting Red Fox.

Below are several of my better photos of the kits and parents.  All the photos are hand held or with the lens braced against a tree.  I used a Sony A-77 camera and a Sony 70-400mm G2 f4-f5.6 lens.  The full set of edited photos covering May 4th through June 17 is here: 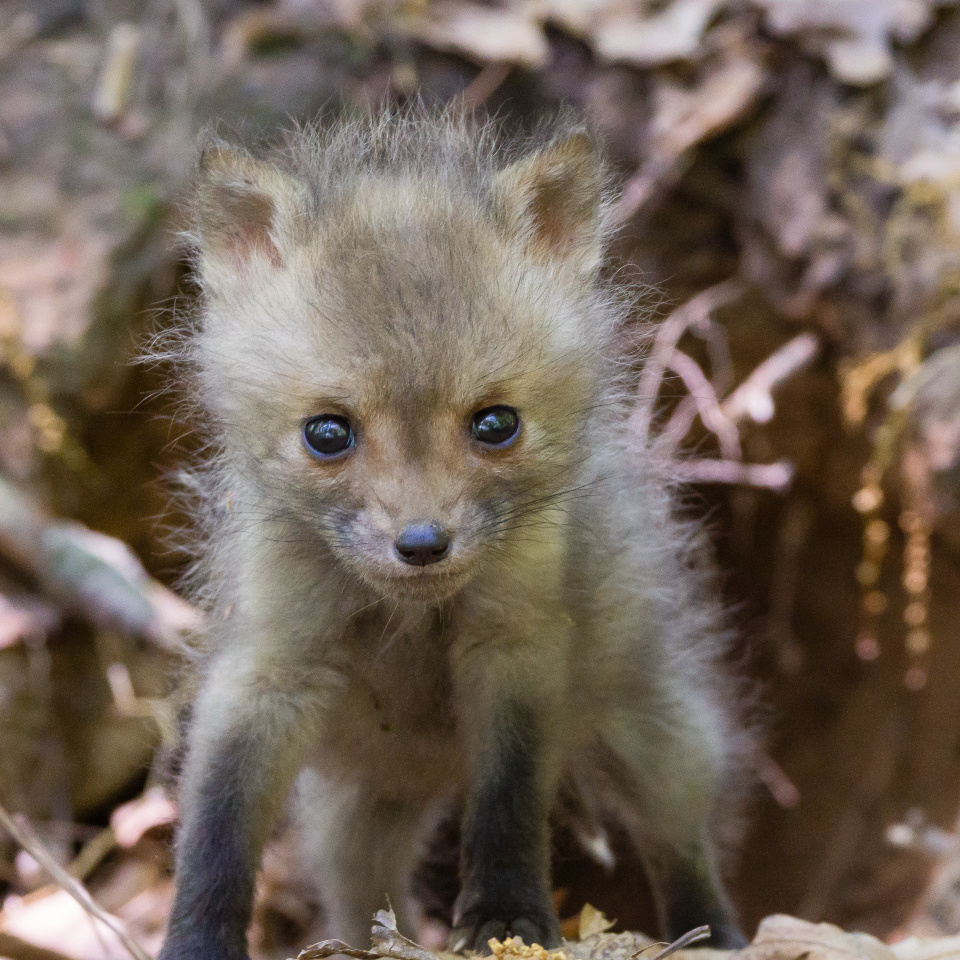 Having never seen a human before

Junior emerges from the den May 4th 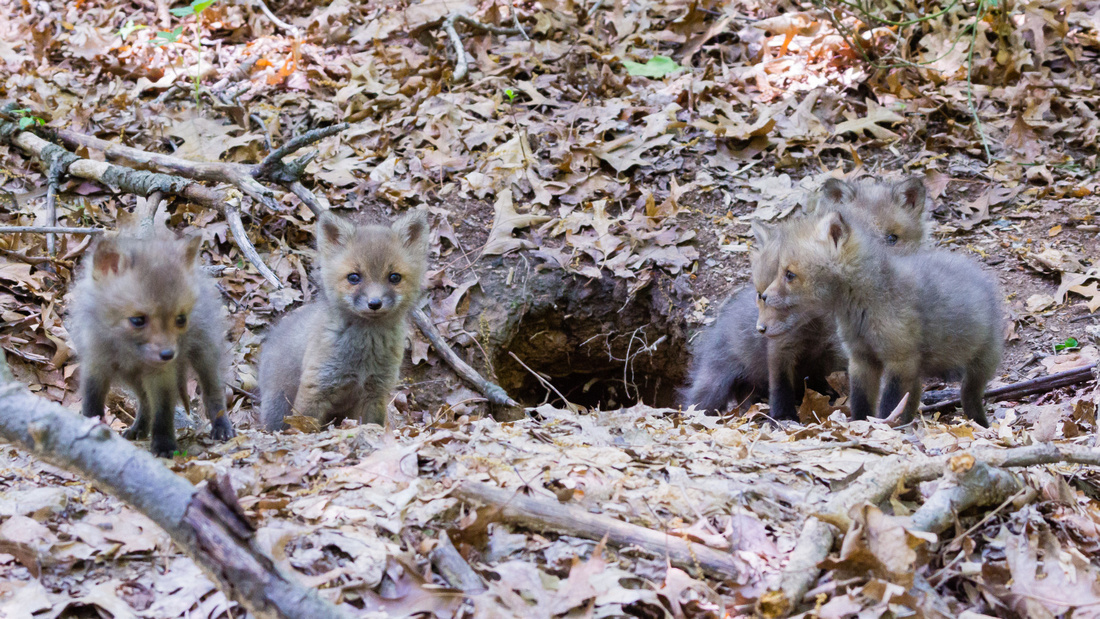 There were at least five 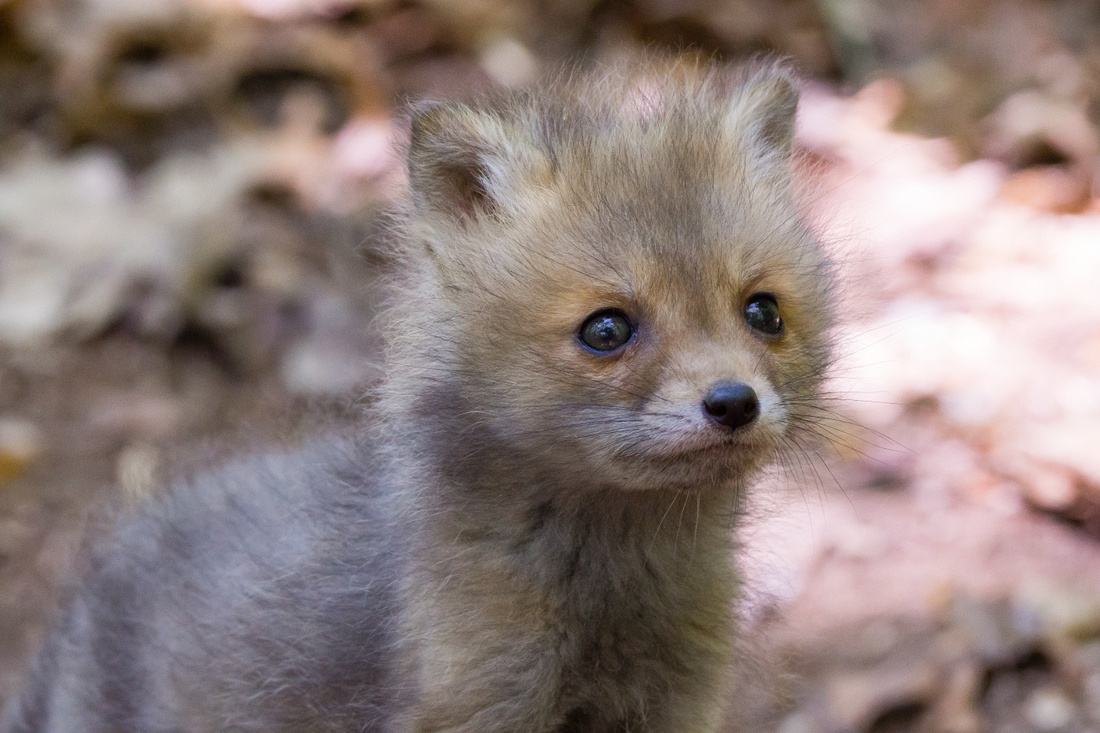 One of the healthiest 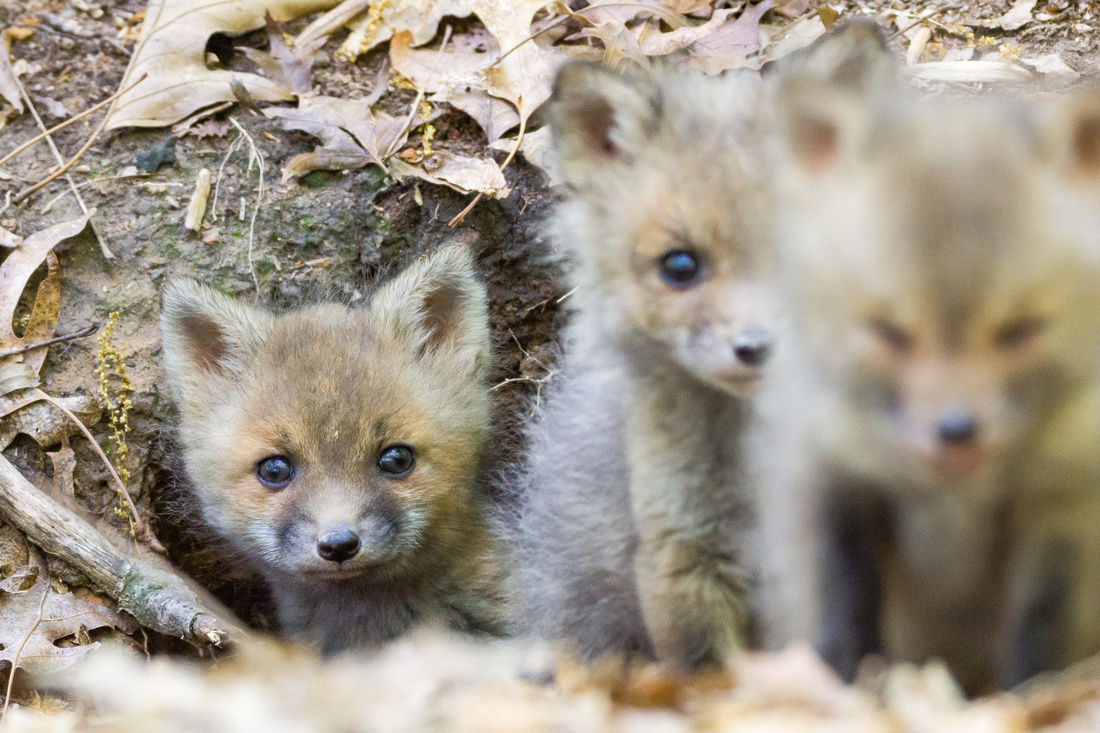 Only one in focus

At the front door 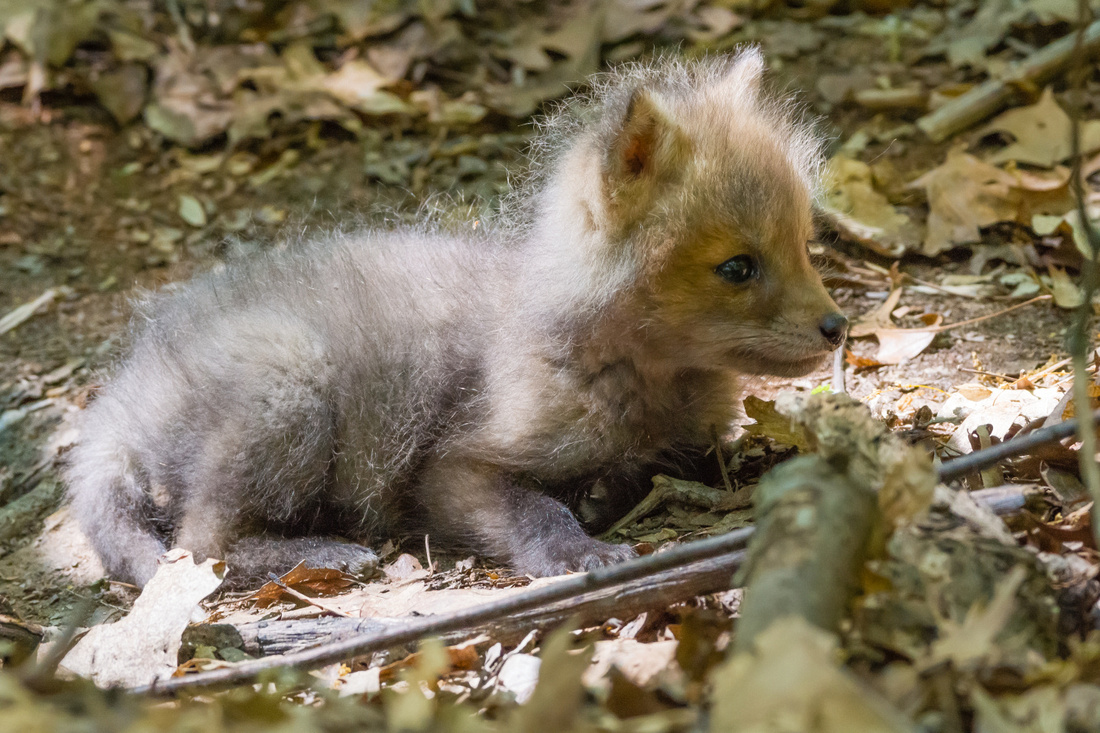 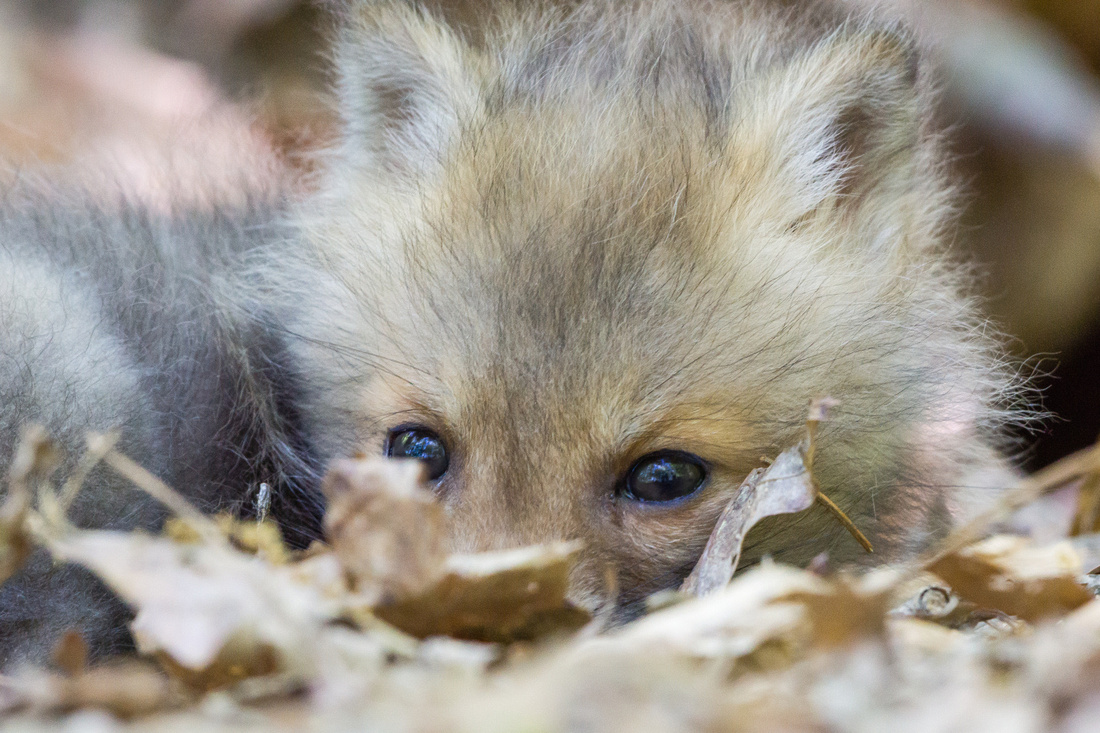 Resting in the leaves 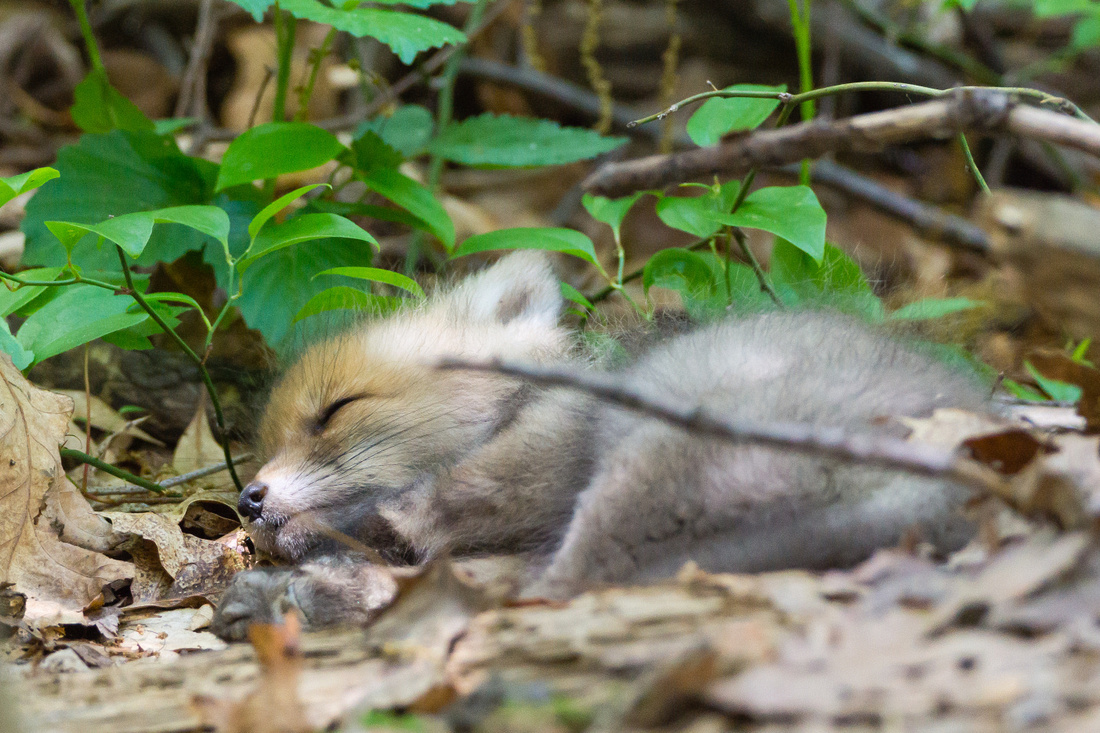 Asleep near the den entrance 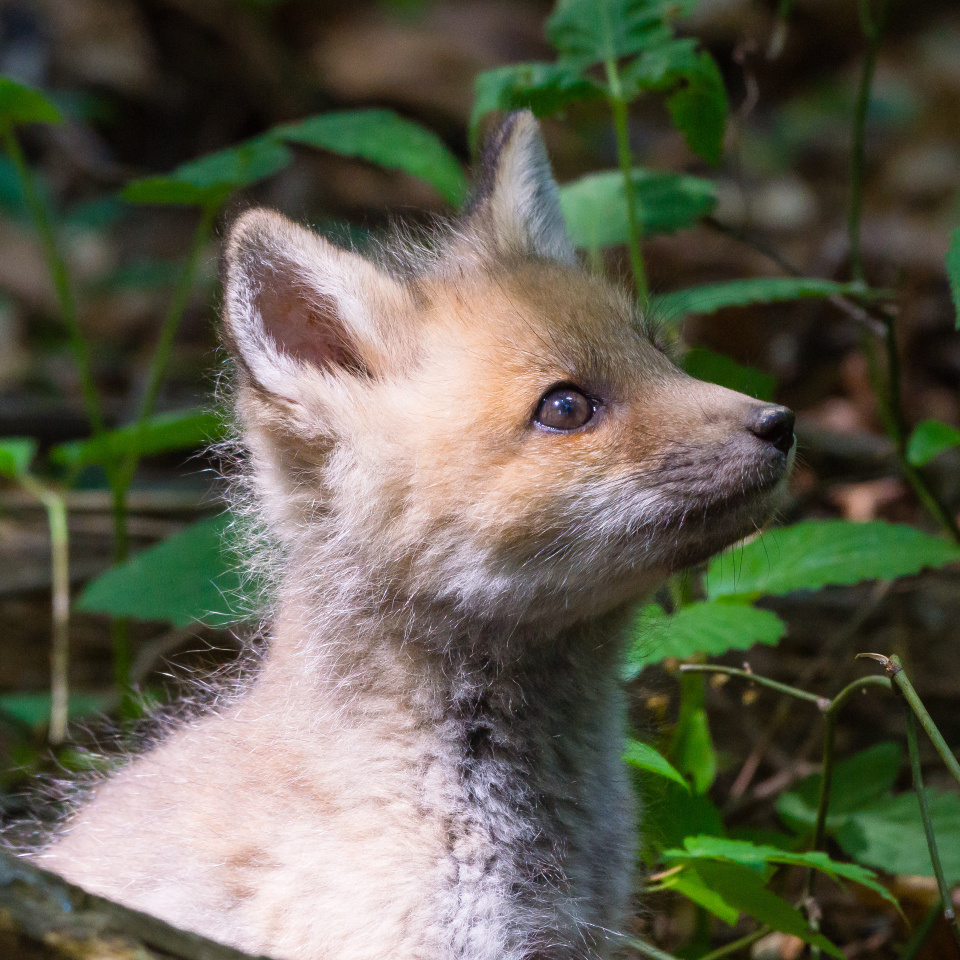 Checking out a bird

Having spotted a bird 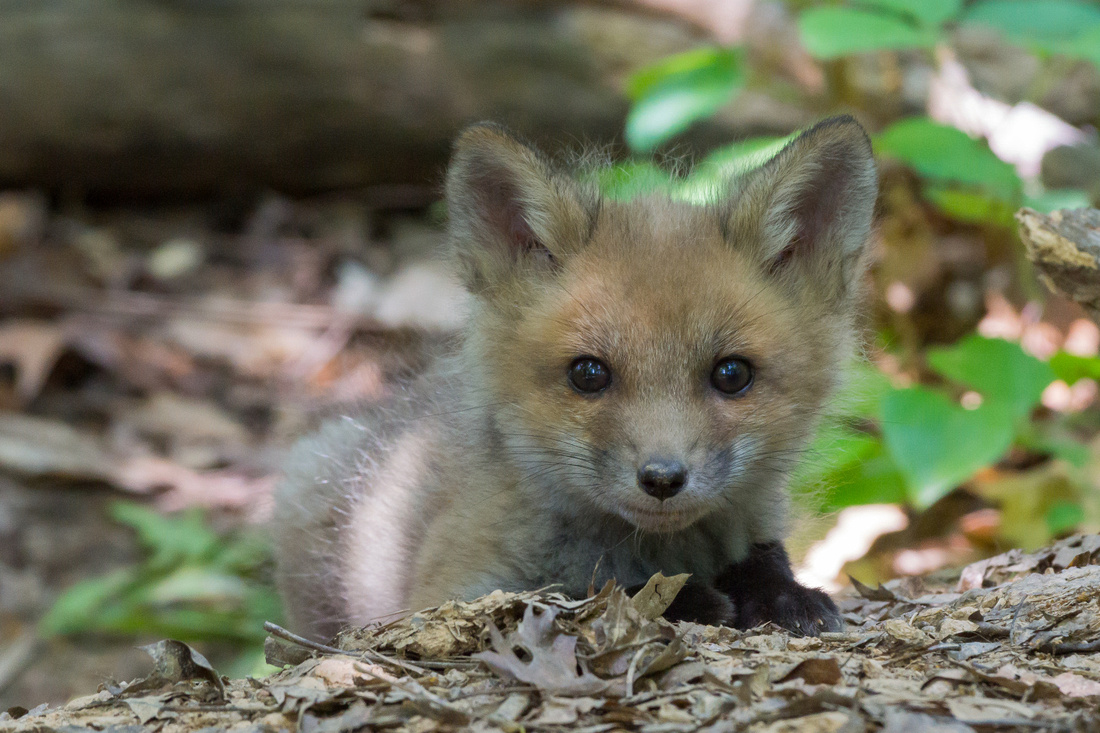 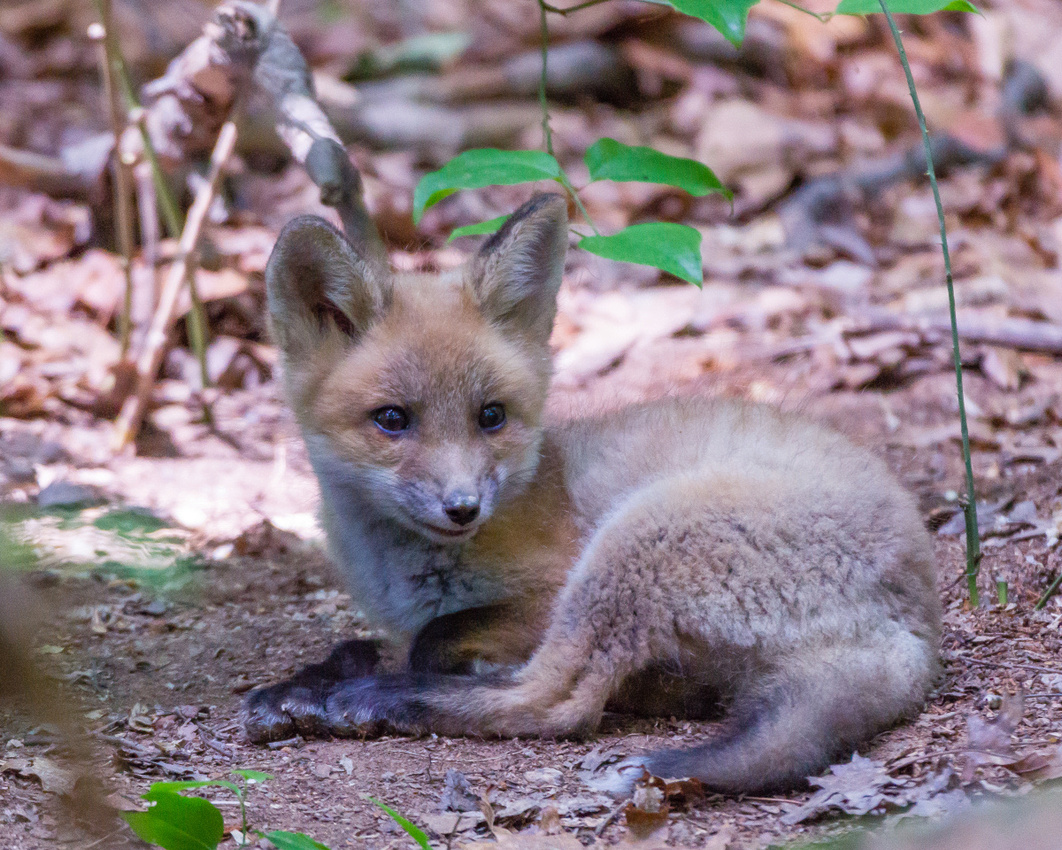 Spotted something in the distance 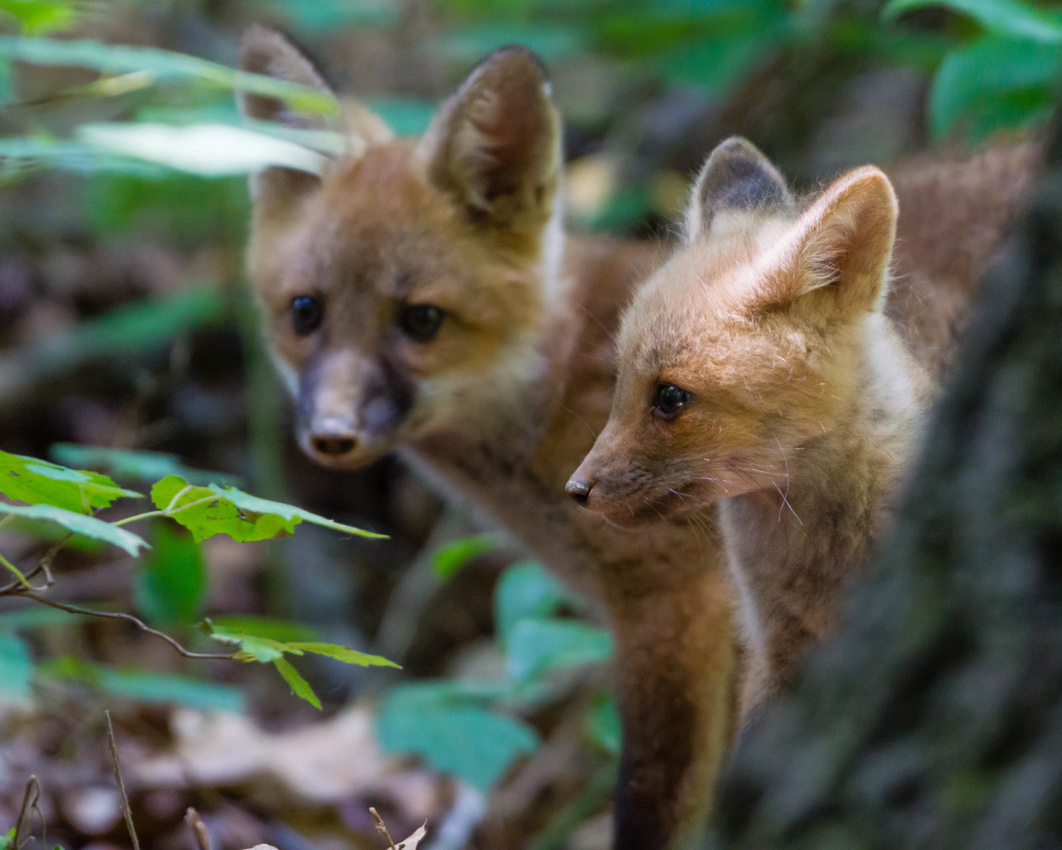 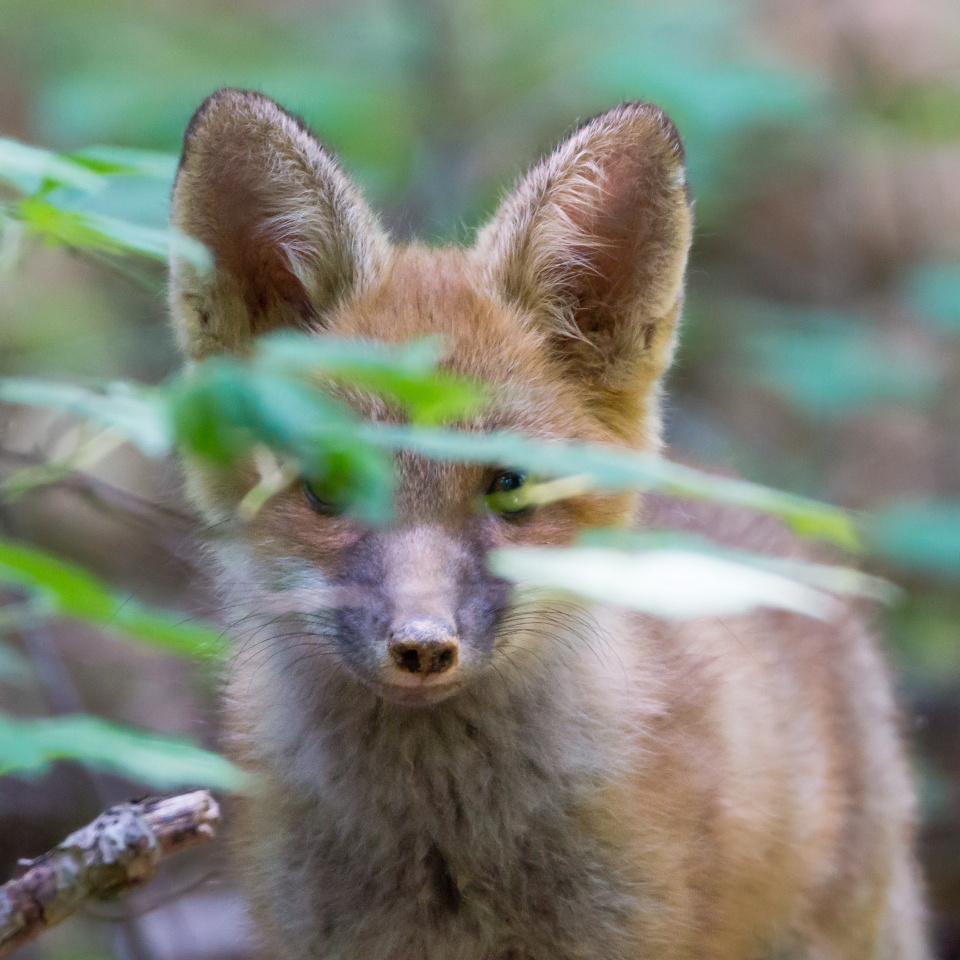 Largest kit through the leaves 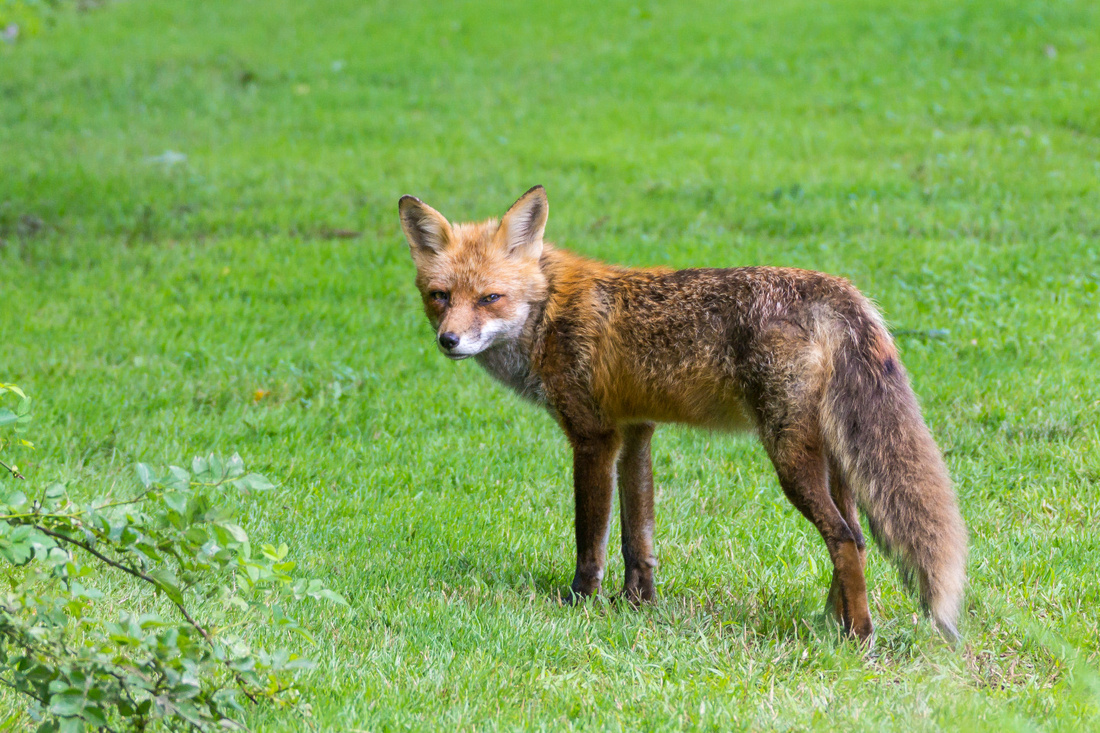 Dad lures me away from the den Watching a foursome tee off

Dad resting under a bush 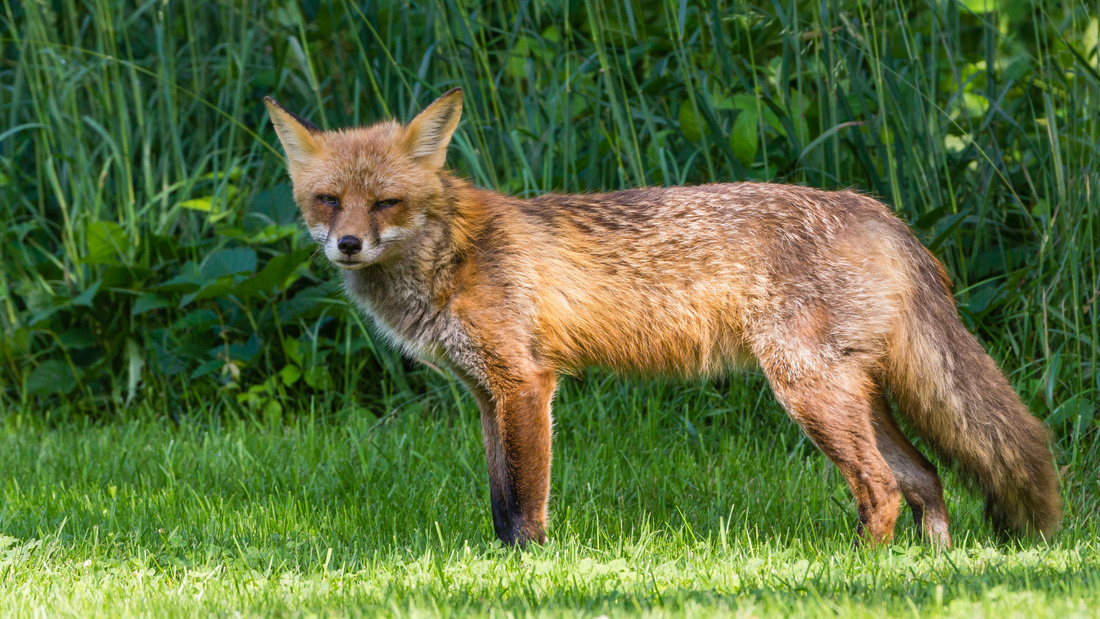 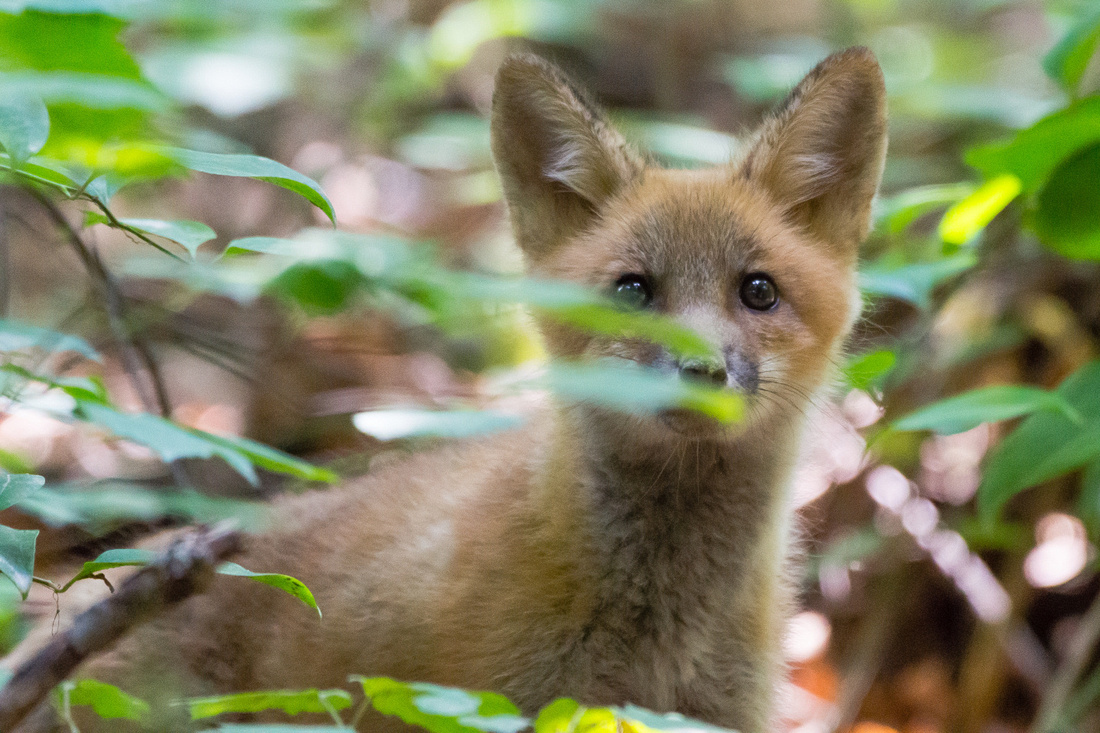 June 9th in the ground cover 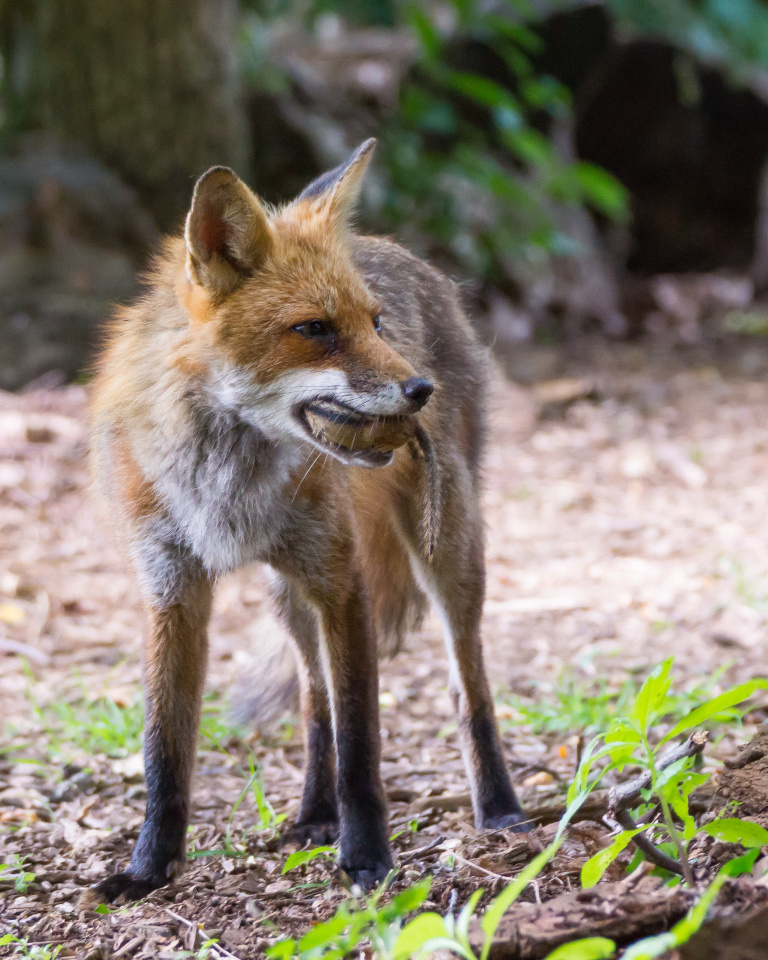 Papa ready to head for the den

Dad with a chipmunk